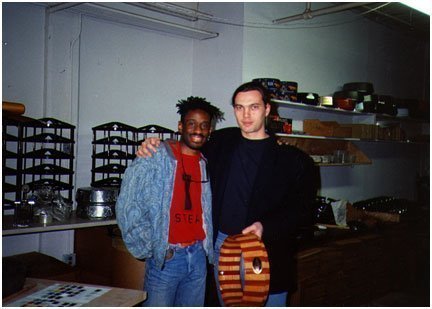 Will Calhoun (born William Calhoun, July 22, 1964, Brooklyn, New York) is an American drummer, who graduated with honors from Berklee College of Music. He is best known as a member of the hard rock/metal band Living Colour.
Calhoun originally comes from the Bronx, New York. He moved to Boston, Massachusetts to attend the Berklee College of Music where he graduated with a degree in music production and engineering. He also received the Buddy Rich Jazz Masters award for outstanding performance as a drummer whilst there.

Calhoun is best known as the drummer of the rock band Living Colour. He has also played with Jungle Funk and HeadFake, recorded several jazz albums as a leader, and has appeared as a sideman with a diverse group of acclaimed artists, including Pharoah Sanders, B.B. King, Mick Jagger, Dr. John, Jaco Pastorius, Wayne Shorter (on the Grammy-winning CD “High Life”), Marcus Miller, Ronnie Wood and recorded with rappers Run-DMC and Public Enemy. As a producer, player, and songwriter, Will has worked on Herb Alpert’s Grammy-nominated CD. He plays in the song Crimson Deep, from What Lies Beneath album, by the Finnish Symphonic Metal singer Tarja. He is also a member of Stone raiders musical band. He was voted “Best new drummer of 1988″ by Modern Drummer Magazine’s readers poll, then again as “Number one progressive drummer” three times (1989, 1991 & 1992). He was named “Best Drummer of 1990″ by Rolling Stone Magazine’s critics poll. Will has also won two Grammy awards, one in 1989 for Best Hard Rock Performance by a Group while in Living Colour, then again for Best Hard Rock Performance with the band in 1990. Living Colour also won an international rock award in 1991 for Best Rock Band. In addition to drumming, Calhoun also wrote the songs “Pride,” featured on Time’s Up, and “Nothingness” from Stain.

Calhoun’s drumming incorporates many different stylistic influences and various augmenting technologies. With Living Colour, he was one of the first drummers to blend advanced funk and fusion techniques with elements of hard rock and thrash metal. More recently he has integrated Drum and Bass grooves, ethnic percussion and sampling into his playing. He is a very physical player, with a broad vocabulary from extremely precise grooves to more free-form avant-funk and jazz approaches. He is also an avid user of the Korg Wavedrum, which allows him to integrate banks of effects (including guitar pedals and other effects not typically associated with percussion instruments) into a single drum. Calhoun has recently added a Mandala Drum into his setup. The Mandala is a dynamic multiple control zone electronic surface that uses sensor technology to detect where and how hard a surface strike occurs.