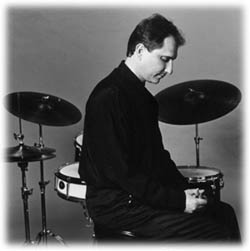 I’ve got a lot of snare drums. Oftentimes it’s just a matter of mood because I can pretty much get a sound out of all of them, but I have a couple of Firchies that I really like.

They’re conically shaped. It’s an aluminum shell, and they’re totally free floating. He makes one drum that’s rotationally tuned, that has these RotoTom-looking castings on the bottom, and you can spin the entire drum and either raise or lower the pitch. That was the first one I got, and I love that drum–I love the way it sounds, I love the way it feels, it’s very responsive. But I really didn’t take advantage of its rotationally tuned possibilities; I would always play it at the same pitch.

No, you need two hands, because it’s not something that spins real freely. You have to hold onto the casting and then spin the drum; it’s more something you would do in between songs. Unless your snare stand was really bolted down: then you could just grab the top rim and spin it. There’s enough resistance there that there has to be something holding it steady.

But as I say, I found myself not using that part of the drum, so he made me one that just eliminated those bottom castings: now the drum is much lighter, it’s much smaller, it’s much easier to carry around. So I use that drum a lot. I have to say, though, that the one with all the castings on it sounds a little bit better; I think all of that metal has something to do with the sound, really contributes to it.